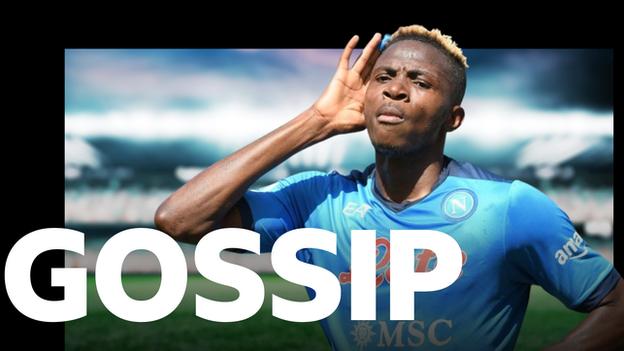 Arsenal have held talks over a move for Napoli and Nigeria striker Victor Osimhen, 23, and are also continuing their attempts to land Brazil forward Gabriel Jesus, 25, from Manchester City. (Goal)

Chelsea head coach Thomas Tuchel is set to have £200m to spend this summer as Todd Boehly’s takeover is on the brink of completion after the Premier League formally announced he had passed its ownership checks. (Telegraph, subscription required)

Brazil winger Raphinha, 25, has told Leeds United’s directors he wants to play for Barcelona, who had a £30m bid for him rejected earlier this year. (Sport)

Belgium forward Eden Hazard, 31, has ruled out a summer departure from Real Madrid, insisting he is desperate to “show everyone what I can do” after an injury-plagued three years with Real. (Goal)

Everton and Crystal Palace both want to sign Watford and Senegal winger Ismaila Sarr, but Newcastle have ended their interest in the 24-year-old. (Football Insider)

Wales forward Gareth Bale, 32, was offered to Atletico Madrid on a free transfer, but they turned him down. Bale is set to leave Atletico’s rivals Real Madrid in the summer. (Marca)

Slovakia goalkeeper Martin Dubravka, 33, wants to stay at Newcastle, despite the club being linked with moves for Manchester United and England goalkeeper Dean Henderson, 25, and Chelsea and Spain goalkeeper Kepa Arrizabalaga, 27. (Chronicle)

Arsenal and France defender William Saliba, 21, will be part of the Gunners squad for next season after impressing during a loan spell at Marseille. (Evening Standard)

English full-back Ryan Fredericks, 29, is leaving West Ham after the club missed their deadline to offer him a new deal. (Football Insider)

West Ham are lining up a move for Nottingham Forest’s English defender Joe Worrall, 25, should the Championship side fail to win promotion in Saturday’s play-off final at Wembley. (Evening Standard)

West Ham are continuing to hold talks with Rennes over a deal for Morocco central defender Nayef Aguerd, 26, and are close to agreeing a fee. (90 min)

Atletico Madrid and Brazil left-back Renan Lodi, 24, is on Newcastle United’s radar with the player’s camp believing the Magpies have a ‘great project’. (Chronicle) 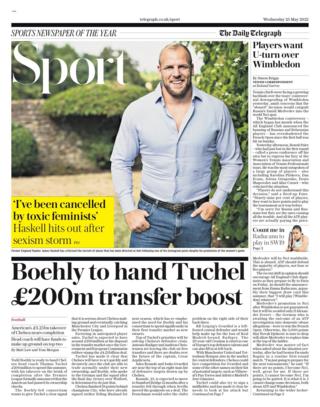