There is so much to admire about Liverpool at the moment, and all of it is down to one man – Jurgen Klopp.

His players have been phenomenal to get them to this stage of the season with two trophies in the bag and the chance of two more to come, but he is the one who sets the tone for everything they do.

I loved seeing him celebrate on the Wembley pitch with his players, his staff and of course the fans after winning the FA Cup on Saturday.

Klopp deserves it, because he has built it – it all starts with him.

An incredible belief and will to win

Jordan Henderson, Divock Origi and James Milner are the only players who are left from his first game in October 2015, away at Tottenham, but he has not just overhauled the squad, he has generated the atmosphere within the club and given them this incredible belief and an amazing will to win.

To get to where they are this season, with a chance of a quadruple still alive, is just staggering and we keep seeing why it is all down to him, and what he has brought to Liverpool.

The way they beat Chelsea on penalties this time was the same way they beat the Blues to lift the Carabao Cup a couple of months ago. Again, there were fine margins between victory and defeat, but to win it that way takes courage as well as belief in what you are about.

Reds captain Jordan Henderson summed it up afterwards when he talked about their attitude and their determination – the way they stuck together, no matter what happened.

That is how they beat Chelsea, and that is why they are going for success on so many fronts.

Klopp hasn’t always picked his strongest team in the FA Cup before this year but with the squad he has now, he was finally equipped to challenge on every front – and they have certainly done that.

You can talk about Klopp’s signings and his tactics, but it is his approach and the standards he sets that are the key.

There is no doubt he gets what his club is about and what it means to the city, so he has this amazing rapport with the fans – they love him, and rightly so – and his players too. You can tell they feel the same from the way they battle for every ball, right until the end.

What next? Reds will fight to the finish

Liverpool have already played in every game possible this season – 60 so far, with three to go.

It’s a quick turnaround now before they face Southampton in the Premier League on Tuesday, which will be a big test because it looks like they have picked up some injuries along the way. Fabinho was already out, Mohamed Salah went off early at Wembley, Virgil van Dijk did not come out for extra time and Andy Robertson also came off before the end.

But they beat Chelsea without some of those players, and they will believe they can beat Saints too.

Manchester City have got the edge in the title race and winning that one is out of Liverpool’s hands now, but we know they will fight right to the end. They have pushed each other to ridiculous heights in the past few years, and that won’t stop now. 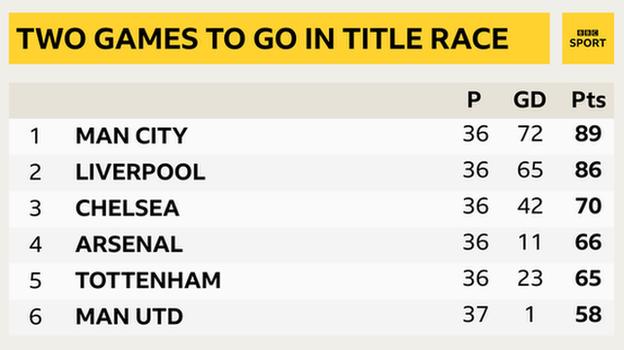 If Liverpool can’t win the Premier League, what Klopp will want is for his side to make sure City have to go and win it, and that they don’t just hand it to them at St Mary’s. He will be desperate to take City to the final day of the season, and be in with a chance until then.

Then comes the Champions League final in Paris, and a fitting way for their brilliant season to end.

Whatever happens in the Premier League, for Liverpool to win three trophies this season would be phenomenal. We know how good Real Madrid are and how they also always seem to find a way to win, but I would not put it past Liverpool to beat them, because of who and what they are – and the mentality of their manager.