Arsenal are in the driving seat for a fourth-place finish at the moment but, with four games to go, we all know what will decide whether they make it – or Tottenham do.

Both teams have another game to play before they meet at Spurs’ stadium on 12 May but you just can’t ignore how much next week’s north London derby matters when you talk about the race for the top four.

It’s absolutely huge, for all sorts of reasons. Like a lot of people, I think whoever wins that game will end up in the Champions League places – but good luck trying to predict who that will be. 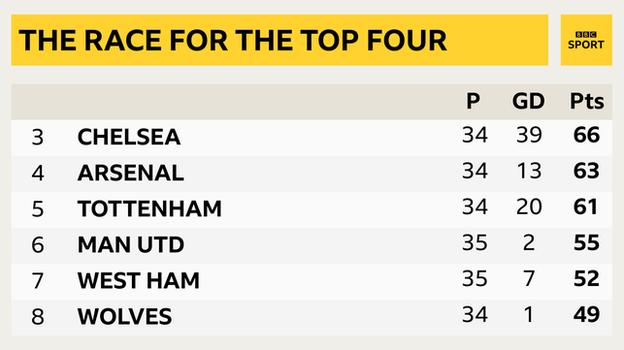 I don’t think it matters who has their noses ahead in the table going into the derby, either. Because of what is at stake, both teams will throw everything they have got at each other.

I played in this game for Spurs a few times and they don’t even need to have anything riding on them to be special occasions because of what you always get from both sets of fans.

This time, though, everything depends on it.

It will feel like a cup final, because fourth place is like a trophy now for Arsenal and Tottenham, with what being back in the Champions League next season would mean for both clubs.

Whoever makes it will have had a successful campaign but it is what happens next that is really important. Quite simply, offering Champions League football makes the difference between being able to sign certain players, or not.

Tottenham are not the only ‘Spursy’ team around

I wouldn’t say I’ve been convinced by either side this season, which is why they’re in the position they are in.

Tottenham have been given their ‘Spursy’ tag because of their inconsistency and how they have a habit of putting themselves in a strong position, but then letting things slide away.

You could say the same about every team who has been chasing fourth place this season, though, including Arsenal.

And at least these two teams are still in the race. It feels like Manchester United turn in a ‘United’ performance most weeks now – and by that I mean a very disappointing one.

You look at where United finished last season, in second place, and who they signed last summer – Cristiano Ronaldo, Raphael Varane and Jadon Sancho – but somehow they are much worse off.

Arsenal and Spurs both have their issues and have dropped some silly points in the last few weeks but things are not anywhere near as bad as they are at Old Trafford, and they both showed with their wins on Sunday that they are ready for what lies ahead.

A day for centre-halves to shine

Tottenham took a bit of time to find their rhythm against Leicester but, as soon as Harry Kane put them in front, they were on top.

Son Heung-min got his goals too and together he and Kane showed again what we already knew – those two players can always dig them out of trouble, no matter what. They have done it all season, and the last few years too.

It’s not just up front where Spurs impressed me, though. In defence, I thought Cristian Romero was absolutely outstanding again.

As a former centre-half myself, I just love the way Romero plays. He is always on the front foot and aggressive, which made a difference today with the two important tackles he went into – and won.

That showed me how much he wanted it, but he’s a clever player too. He gets himself in good positions and is always there if someone makes a mistake. They are going to need more of the same in the next few weeks.

After seeing Spurs win comfortably and move above them in the table it was down to Arsenal to respond when they went to West Ham for the later kick-off.

Their centre-halves, Rob Holding and Gabriel, also played a big part in the win over West Ham, but their biggest contributions obviously came at the other end of the pitch.

It doesn’t matter whether your strikers are scoring lots of goals or not – and Arsenal’s really aren’t at the moment – in any season where you are trying to achieve something then you need to get goals from all over your team.

Gunners boss Mikel Arteta must have loved seeing them both score from set-pieces, and also the way his team went on to get a result.

Arsenal show they can grind out a big win

I don’t think Arsenal played particularly well at London Stadium, but I was still impressed with the way they were able to grind their win out.

It wasn’t pretty but it didn’t have to be. It felt like we saw a different side of Arsenal again, and it meant they got another vital three points in what was a very difficult game.

After having that little wobble a few weeks ago where their form dipped, they have now bounced back and beaten Chelsea, Manchester United and West Ham in successive matches. All wins are welcome of course, but getting them in such big games is even better.

Arsenal are now only three points behind third-placed Chelsea, who surprisingly lost at Everton on Sunday.

I don’t think Thomas Tuchel’s side have to worry much about dropping out of the top four though.

They have thrown in the odd poor performance recently, but that’s hardly surprising with what has been going on at the club off the pitch.

They still have far more good days than bad ones, and when they are good, they brush most teams aside.

I watched the Blues play Liverpool in the Carabao Cup final a couple of months ago and it was the best 0-0 game I’ve ever seen.

Even when they are bad, you always see a reaction from them, which is another good sign. We saw that against Real Madrid in the Champions League quarter-finals when they paid the price for a poor first 45 minutes in the first leg but came back strongly in Madrid and almost got through.

I don’t look at their remaining games and think they are going to struggle, which leaves just one place in the top four up for grabs.

I’ll tell you who I think will get that when the north London derby is done.