Manchester City believe manager Pep Guardiola will sign a new deal in the summer, with talks having taken place about extending the Spaniard’s stay until 2025. (Sunday Mirror)

Manchester United and Portugal forward Cristiano Ronaldo could return to Real Madrid.The Spanish giants are keen on signing the 37-year-old, who played for Real from 2009 to 2018. (Sunday Mirror)

Erik ten Hag, who will leave Ajax to take over as Manchester United manager at the end of the season, wants to sign Feyenoord and Netherlands left-back Tyrell Malacia, 22, for the Old Trafford club. (Sunday Mirror)

Chelsea are concerned England midfielder Mason Mount will leave the club. Under current government sanctions, the Blues cannot offer the 23-year-old a new contract, with Manchester City and Liverpool thought to be interested in him. (Sun on Sunday)

Borussia Dortmund chief executive Hans-Joachim Watzke says the club beat Manchester United to the signing of Erling Haaland in December 2019 because they were prepared to put a release clause into the 21-year-old Norway international’s contract. (Goal)

Chelsea will look to offer 22-year-old England right-back Reece James, who has been linked with Real Madrid, an improved contract once they have new owners in place. (90 Min)

Dutch midfielder Frenkie de Jong has been linked with Manchester United but Barcelona boss Xavi says the 24-year-old is “the present and the future” at the Spanish club. (Manchester Evening News)

France forward Ousmane Dembele, 24, has a more lucrative offer from Paris St-Germain than current club Barcelona, but his preference is to stay at the Nou Camp where his contract runs out in the summer. (Sport)

Wolves are open to selling 25-year-old Portugal midfielder Ruben Neves, with the West Midlands club looking to bring in strikers and midfielders to add to their squad. (Sunday Times – subscription required)

Crystal Palace are closing in on signing Lens and Mali midfielder Cheick Doucoure, 22. (Sun on Sunday)

Everton are interested in signing 29-year-old England centre-back James Tarkowski, whose contract at Burnley runs out in the summer, if the Goodison Park club avoid relegation from the Premier League. (Football Insider)

AC Milan have agreed a deal with Lille to sign Portugal midfielder Renato Sanches, 24, for about 20m euros (£16.8m) and add-ons worth up to 5m euros. (Football Italia)

Netherlands defender Sven Botman, 22, has been linked with Newcastle United and AC Milan and says he expects this season to be his last at Lille. (Get French Football News) 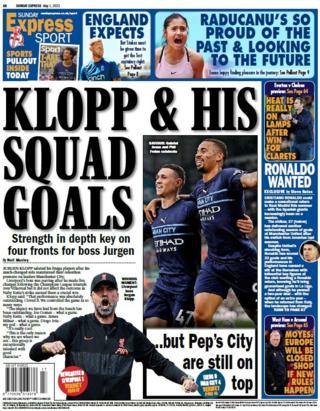 The back page of the Sunday Express