The Women’s Super League continues with the penultimate fixtures for most of the clubs this weekend as front-runners Chelsea and Arsenal continue to fight for the title.

Who will come out on top in the race for the final Champions League space? Will bottom club Birmingham City pull off a great escape? Can Sam Kerr continue her electric scoring form?

Here’s a guide to what to look out for this weekend.

Crunch time in the title race

There is a scenario where Chelsea can lift the title this Sunday should Arsenal lose to Aston Villa at 14:15 BST – a match live on BBC One, BBC iPlayer and BBC Sport website – and Chelsea beat Birmingham City at 18:45.

After edging past Tottenham 2-1 in midweek, the Blues are currently four points clear of the Gunners having played one more game, but manager Emma Hayes insists her side cannot afford to lose their concentration.

“I’ve been here so many times to know that nothing is won yet,” said Hayes. 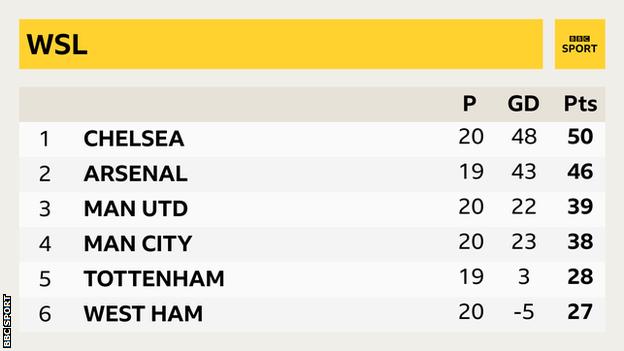 “We have to respect our opponents, nobody is running away with themselves. We just want to keep grinding through every game.”

Arsenal boss Jonas Eidevall was relishing the challenge in his Friday news conference.

Can anyone stop Kerr from scoring?

Australia striker Kerr was on fire again in midweek, heading in Chelsea’s winner against Tottenham – her 18th goal in as many WSL games and her 28th in all competitions this campaign.

“There is no question Kerr is one of the best players I have ever coached,” said Hayes.

“I think her record speaks for itself, her goal contributions in whatever capacity are outstanding. She has a gift and a natural ability to be in the right place at the right time, you can’t teach that.”

Kerr, who was named the Football Writers’ Association Women’s Footballer of the Year on Friday, is the top scorer in the league this season, six goals clear of second-placed Vivianne Miedema.

Manchester City have the chance to leapfrog third-placed Manchester United, and go into the final Champions League qualification place, when they host Brighton on Saturday.

Rivals United, who have played one game more, face West Ham on Sunday and their manager Marc Skinner admitted he has been “enjoying” the battle for a spot in Europe.

“We have this real burning ambition inside,” he said. “I have thoroughly enjoyed it and I know the players have.

“I want to see a fire in these last two games. I want to be in a zone where we don’t even talk about [being a top-three team] anymore.

“That’s where a Manchester United team should be driving to.” 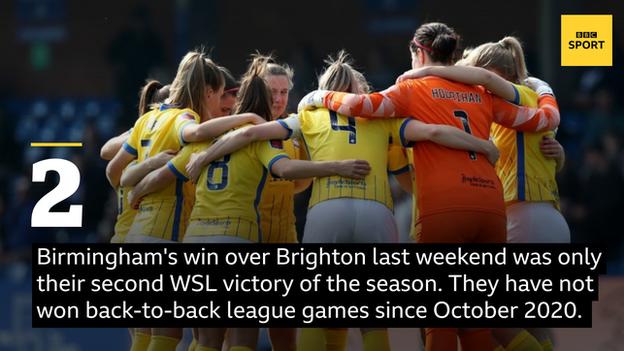 At the wrong end of the table, Birmingham will be relegated this Sunday if Leicester beat Reading and they lose to Chelsea.

The two-time WSL runners-up kept their survival hopes alive with a 3-1 win over Brighton last time out.

“It’s human nature for some people to assume what’s going to happen,” said Blues interim head coach Darren Carter, who is close to signing a permanent deal with the club.

“But I’ve been in this game for some time; you can expect the unexpected. I don’t think you can write us off.

“There’s still a chance for us to stay up. I wouldn’t be sitting here trying to keep this team in the WSL if I didn’t think we had the characters or the fight or the spirit.”

Former England international Anita Asante has announced she will retire at the end of the season following a 19-year career at the top of the women’s game.

On Sunday she faces Arsenal, where she was a part of their quadruple-winning season in 2007.

Villa manager Carla Ward has revealed the 36-year-old will be given the captain’s armband for the club’s remaining fixtures, with skipper Remi Allen needing surgery after rupturing her anterior cruciate ligament.

And Arsenal boss Eidevall, who coached Asante at FC Rosengard, also wished her well – just not too well.

“I hope she has a great result in her final game, just not against us at the weekend,” he said.