Manchester United have indicated to Napoli they are willing to pay £84m for 23-year-old Nigeria striker Victor Osimhen. (La Repubblica – in Italian)

Tottenham will listen to offers for Spain left-back Sergio Reguilon, 25, amid interest from an unnamed Spanish club. (Football Insider)

Crystal Palace are considering a loan move for Manchester United defender Aaron Wan-Bissaka. The 24-year-old came through the youth ranks at Palace and made 42 first-team appearances. (Athletic)

Napoli have decided against signing Manchester United defender Axel Tuanzebe on a permanent deal. The 24-year-old has been on loan at the Serie A club since January but has made just one league appearance. (Calciomercato, via Sun)

West Ham and Aston Villa are among the teams in contention to sign Colombia midfielder James Rodriguez, 30, from Qatari side Al Rayyan. (Fichajes – in Spanish)

Galatasaray and Denmark centre-back Victor Nelsson, 23, has been linked with a move to Aston Villa. (Tum Spor – in Turkish)

Premier League referees Martin Atkinson and Jonathan Moss will retire at the end of the season. (Telegraph) 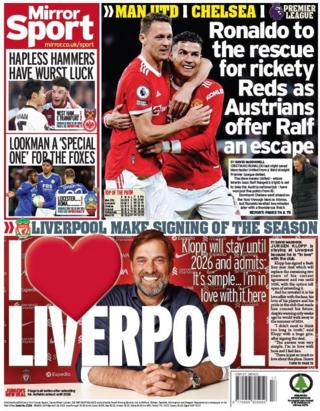 The Mirror leads on Jurgen Klopp’s new deal at Liverpool