Arsenal are looking to bring Manchester City striker Gabriel Jesus, 25, to the Emirates, with the Gunners’ technical director Edu having held discussions with the Brazil international’s representatives. (Athletic, subscription required)

Mo Salah wants to stay at Liverpool but his long-term future is uncertain with no agreement reached on contract negotiations and the 29-year-old Egypt forward saying money is not the only factor. (Four Four Two)

Paris St-Germain have made France striker Kylian Mbappe, 23, a contract offer worth 50m euros (£42m) a year, which would make him the club’s highest earner. His much reported move to Real Madrid has reportedly stalled over the player’s image rights. (Goal)

Newcastle are preparing a move for PSG goalkeeper Keylor Navas, who will leave the Ligue 1 leaders in the summer, but the 35-year-old Costa Rica veteran is also attracting interest from Juventus and Sevilla. (Fichajes – in Spanish)

Declan Rice has turned down a third contract offer from West Ham worth a reported £200k a week. Despite the Hammers insisting the England midfielder is not for sale it is understood they would accept £150m for the 23-year-old, a target for both Manchester United and Chelsea. (The Guardian)

Tottenham have made contact with Inter Milan about signing the Netherlands right-back Denzel Dumfries, 26. (Tuttosport, via Sport Witness)

Celtic are at advanced stages of talks with Tottenham to sign their United States centre-back Cameron Carter-Vickers, 24, on a permanent deal. (SBI Soccer)

Another Tottenham defender, Wales international Joe Rodon, 24, has been told he can leave the club. (Football Insider)

Chelsea defender Antonio Rudiger has ruled out moving to Manchester United. The 29-year-old Germany international becomes a free agent in the summer but is only considering clubs in next season’s Champions League. (Ben Jacobs, CBS)

Wayne Rooney turned down an offer to work under Erik ten Hag at Manchester United, insisting he would only leave Derby County for a managerial role. (Athletic, subscription required)

Former Manchester United, West Ham and Manchester City forward Carlos Tevez could make a shock return to football nearly a year after the 38-year-old played his last game for Boca Juniors. The Argentine has visited AC Milan, Juventus and Tottenham as well as his old club West Ham. (Goal)

Leicester and Aston Villa are interested in signing former Manchester City youth team product and Fulham loanee Seko Fofana, 26. The Ivorian midfielder is currently on the books at Lens. (But! Football Club) 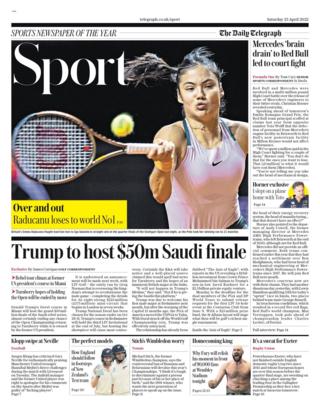