A truck with the letter “Z” drives past an apartment building displaying a mural of Russian President Vladimir Putin in Kashira, Russia, on Wednesday. The letter Z, which is painted on Russian military vehicles in Ukraine, has become a symbol of support of the Russian army. Photo by Maxim Shipenkov/EPA-EFE

April 21 (UPI) — Russian President Vladimir Putin on Thursday claimed success in Mariupol, but ordered troops not to storm a steel plant where Ukrainian fighters continued their resistance and refused to surrender.

Yurly Ryzhenkov, CEO of Metinvest Holding, which owns the Azovsteel plant, told CNN the situation was “close to a catastrophe” with food and water running out, but the fighters were not giving up.

“When the war started we had stocked quite a good stocks of food and water in the bomb shelters and the facilities at the plant so for some period of time the civilians, they were able to use it and basically survive on that. Unfortunately all the things, they tend to run out, especially the food and daily necessities. I think now it’s close to a catastrophe there,” Ryzhenkov said.

For weeks, Russian forces have attacked Mariupol to gain a strategic advantage in the southern port city, but have met stubborn resistance there by Ukraine‘s military and civilian fighters. This week, they shelled the steel plant.

Since the invasion began Feb. 24, Putin has falsely claimed Russia’s war is a “peacekeeping” mission intended to root out neo-Nazi leadership in the former Soviet republic. He’s also said the invasion is “saving” people in Ukraine. On Thursday, he struck a similar chord.

“The completion of combat work to liberate Mariupol is a success,” the Kremlin leader said according to the state-run Tass news agency.

“I congratulate you. Pass on the words of gratitude to the troops,” Putin told Russian defense minister Sergey Shoigu. “I want them all to know … they are all heroes.”

During the meeting with Putin, Shoigu said that Russian troops “liberated” the city.

Thursday’s remarks came after Putin issued two ultimatums this week for Ukrainian forces to surrender Mariupol. They complied with neither. 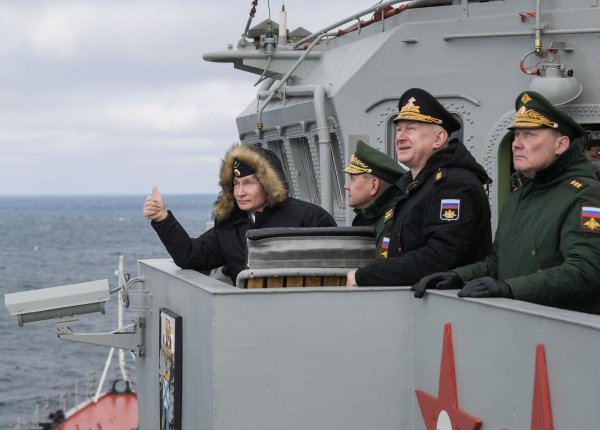 Putin also noted Thursday that he’s ordered his troops not to storm the Azovstal plant in an apparent change of strategy.

Mariupol is important to Russia because it would provide a land bridge from Crimea — which Moscow unlawfully annexed in 2014 — to the Donbas regions of Donetsk and Luhansk. Mariupol would also aid Russia in its new military focus on controlling the Donbas, a separatist-held region that’s opposed the government in Kyiv for nearly a decade.

In Thursday’s meeting, Putin explained that efforts to raid the four-square-mile steel plant and its network of tunnels is “impractical” and said Russian forces instead will form a blockade so tight that “even a fly can’t get in or out.”

The meeting came one day after Moscow agreed to open a humanitarian corridor in Mariupol to allow an escape for thousands of trapped civilians there. A small convoy of buses carried civilians out of the city on Wednesday, but Ukrainian officials said the effort was largely unsuccessful. Those who escaped were women, children and the elderly.

One of the primary factors that hindered greater success in evacuating Mariupol, Ukrainian officials said, was the lack of a genuine cease-fire. Despite agreeing to the escape corridor, Russian forces relentlessly bombed the city all day Wednesday.

Moscow says it has tightened its grip in the Luhansk region of the Donbas — where regional leader Serhiy Haidai said Russia controls about 80% of the area, including the town of Kreminna. Russian defense officials said they ordered more than 1,000 strikes on Ukrainians positions.

Russia also is continuing its advance toward Kramatorsk, also in the Donbas region, with rocket attacks Thursday. Dozens of Ukrainian civilians, including children, were killed in Kramatorsk two weeks ago when a Russian airstrike targeted a crowded train station there where people were waiting for transportation out of the area.

Relatives and friends attend the funeral ceremony for a Ukrainian Ruslan Nechyporenko, who was killed March 17 by Russian soldiers in the recaptured city of Bucha, north of Kyiv, Ukraine on April 18. Photo by Vladyslav Musiienko/UPI | License Photo

How to Find Cheap Apartments and Jobs on Craigslist Raleigh

Thermal Phone Cases For Your iPhone